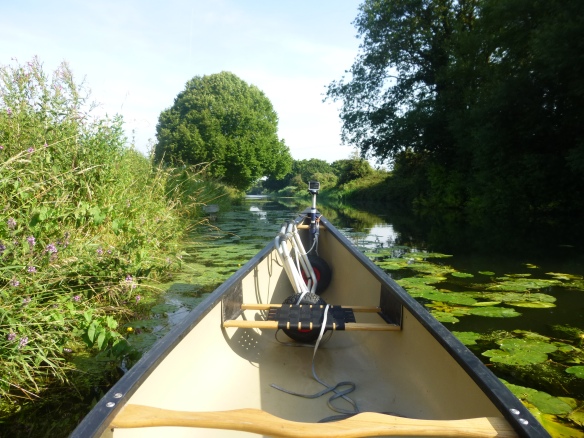 Breakfast stop on the Chichester Canal

When Oscar Goldman murmurred these words prior to reconstructing Steve Austin he certainly wasn’t about to go for a paddle. But I was, and in searching for a title afterwards I first considered ‘As I Went Out One Morning’ (Bob Dylan), ‘Quite Early One Morning’ (Dylan Thomas), or or ‘As I Went Out One Mid-Summer Morning’ (Laurie Lee). Dylan won the Tom Paine Award for the song, which references Tom Paine, and Tom Paine had a strong link with Chichester, so it all goes round and round.

I wanted to post a video here, but it would cost me 60$ a year for the facility, so double click the following link to see the footage on YouTube:

As I Paddled Out One Mid-Summer Morning

The video is crudely edited – I’m still low on the learning curve – but things can only get better, as we once believed before TB cosied up to GWB.

Postscript: The video originally had  Dylan’s song, from the John Wesley Harding album, as a soundtrack. Due to understandable copyright restrictions, it was  blocked by YouTube. I have replaced it with a free-to-play track by Lunasa, but which carries a payload of adverts. Sorry!

First craft market of the year at Emsworth this morning.  Both the sun and the people of Emsworth came out in force,  there was a super buzz in the hall, and sales were good. Rowlands Castle for me next Saturday, then Bosham Art in the Garden Trail , followed over the next  two weekends of the Emsworth Arts Trail. More sun, please, more sun!

The delightful and super-efficient Tara, who organised the Chichester College Xmas Fair, has just sent us all her  Press Release for the 20th Dec issue of the weekly Chichester Observer. It includes a rather good photo of my stall taken by one of her students, a comment I can’t remember making so probably did, and comments from other stall-holders. Perhaps the story will be syndicated, maybe ‘Hello’ magazine will take it up. I’d better spruce myself up ready for the paparazzi.  Or maybe….  not.

Well, it’s been a busy week, with several Craft Fairs and studio visitors. Rowland’s Castle, delightful as always, was enhanced by Sylvia’s home-made mince pies & mulled wine. Being at Chichester College provoked vague memories of a past life.  The Gallery (as I like to call my garage) has been spruced up (a seasonally appropriate cliché). Next Saturday I’m at Tuppenny Barn, when all proceeds go towards funding Maggie’s magnificent Education Centre. Since this photo was taken, the straw-bale walls have been built.

Last day of the Emsworth Arts Trail  today.  All set for a warm and sunny one, even better than yesterday, when we were able to sit out in the garden chatting with friends and visitors. Rock bun numbers  diminished rapidly, but there’ll be a fresh baking this morning. Flap jack is holding up well, but expected to go. The ‘Seconds & Rejects’ table in the gallery seems to be drawing the most interest. Is primacy of perfection a myth? Or is it that we just like a bargain? Come and decide for yourself, it will be lovely to see you. As well as the pottery and photography in the garage gallery, we have knitting and weaving in the summerhouse, which we affectionately call  ‘Sheila’s Shed’.

Despite the cold and the rain it has been a great day, with a steady stream of visitors who seemed to like the pots and certainly bought a lot. Thank goodness I have built up a good stock level, otherwise by Day 5, at this rate, it would be “Yes, I do make pots, but I’m afraid I haven’t got any to show you”. In the afternoon I did a session on the wheel which seemed to go down well, and the lump of mud obediently transformed into a fine  jug which is earmarked as a present for one of our guests.

…..The Boat Project.   Well, they can now, because they are out of the kiln intact. Double-click the images to enlage them:

O & P will be at Thornham Marina as part of the Emsworth Art Trail exhibition on Monday 7th May. The rest of the time they will be here at the studio.

My toe is fine, my head has healed (don’t ask), and I have a new camera, so all is well with the world. Only a week now until the Arts Trail, and mild panic has set in. With reason maybe, as most of my special pots were made from a delivery of clay which proved to be faulty, warping far too readily when fired. 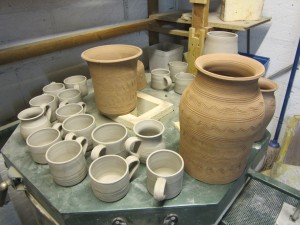 I’ve managed to build up some other stock, even if it is a bit last-minute. Hence these items being fast-dried as the kiln cools from the previous firing, and an extra stock of terracotta which only needs one firing.

I’m fascinated by designs where form and function complement each other. To make these stoneware candle-holders I took a plaster cast of a cookery ring mold, then finished the slumped slab on the wheel. I’ve extended this idea to make larger garden planters using an inner-tube as an inflatable mold. The first of these go in the kiln this week.

I recently bought an impressive set of letters from a company called Impressive Letters (impress@broomhalllodge.freeserve.co.uk). Quite expensive, but very good.  Now they need to earn their keep.  First up is a short poem, which has gone into the kiln this evening for the bisc firing.  The slabs will have to be fairly small, so we are talking haiku here, not epic.  Any suggestions? 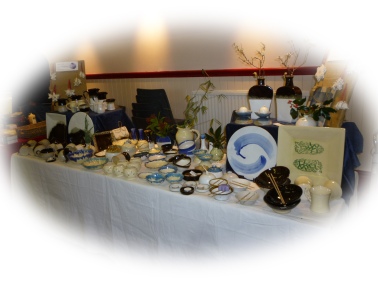 A very enjoyable morning at Rowlands Castle Craft Market, organised by Sylvia Tomkinson, herself a skilled jeweller.  Minus 2 degrees when I left home, but sunny and crisp.  The hall was toasty with the radiators at full blast.  Sylvia’s mulled wine and mince pies added to the glow.   David, who runs Candle Cavern based in Petersfield, had the adjoining stall, and helped me to sort out the problem of my smokey oil lamps. He uses beeswax and soy wax for his candles, and works with a keen environmental awareness. Kate Steed, who keeps a flock of Jacob sheep at nearby Northwood Farm, had her usual cosy display of winter warmers – sheepskin rugs, wool, and knitwear.

I was delighted to be welcomed back  by several customers from last year. As always, I had several most interesting and useful chats with people on subjects as diverse as ski-ing,  barn owls and the EU. Between times I sold a few ceramics, Xmas decorations and soap dishes being top sellers again.

This is my last Market for 2011. I’m already pencilling-in up to Xmas next year, but the main event to begin with will be the Emsworth Arts Trail, 5 days in May when my studio in Woodmancote will be open to the public. More of that in a later post.

This super  local craft market is this Saturday, 10th December, 10 ’til 1 in the Parish Hall. Click here for full details.

Last Saturday I was at the Emsworth Craft Market, another good one, and I had my highest takings of all time (even going back to when I used to  sell wooden toys & puzzles there, 25 years ago). My little ceramic Xmas decorations sold well, as did the new soap dishes with their hand-carved bamboo supports for the soap. To find out more about Emsworth Craft Market and to see the work of other exhibitors, click here.

Well, ‘pottery’ is a near-anagram of poetry…..

Enough of this drivel. Let’s be serious. This blog will be used to let you know what’s going on in the studio – successes and failures, new lines and  abandoned dreams. For a start, the new stoneware is going down a treat. A rich, deep, dark tenmoku complements a subtle satin-matte white, and where they overlap there is the most amazing random mottling.

Here is a sample on a small wall plaque:

To date I have used this for mugs, jugs, large round and square plates, vases and dishes.  I am also using the white on  its own, and in combination with a denim blue.